One of the fundamental underlying principles of Tarot is the idea of duality and polarity. Dark and light, masculine and feminine, creative and rational–it’s everywhere in Tarot. Buried in the very structure of the deck is the idea that the universe is made up of opposites. So it makes sense that one of the easiest ways to understand the deck is to look for the different polarities that manifest in it.

This is perhaps easiest to do in the Minor Arcana, because you have the four classical elements to work with, and everyone understands the elements as opposites of each other. Fire is the opposite of water; earth is the opposite of air. Wham, bam, thankya ma’am, you’ve structured the suits of the Minor Arcana as opposite ends of two different spectra. Then, we can add in another level: fire and air are considered masculine, while water and earth are considered feminine. There again, we’ve found the duality. 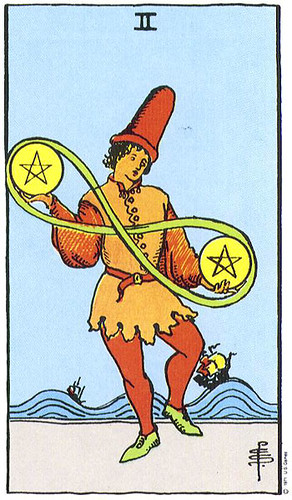 This is one of the basic principles behind reading with elemental dignities (beyond the surface-level “fire is about passion and creativity, while earth is about money and health, and water is about…”). Fire and water don’t get along, so when you see fire cards and water cards next to each other, you call them “ill-dignified” and see their respective energies as weakened or blocked. Fire and air, on the other hand, get along great. (Fire and earth are somewhere in between.) It helps to show, on a very basic level, how the energies of various cards can intersect.

That’s the traditional way of doing it. Myself, I’ve developed a bit of a different method in my personal practice. This is total UPG, and I don’t in any way mean to say that my method is better than the tried-and-true one, but it makes more sense to me, and it’s what I tend to use in my personal readings.

I structure the four suits of the Minor Arcana along three basic polarities: masculine/feminine, abstract/concrete, and rational/emotional. Right away, I’m deviating from tradition here; after all, “masculine” is generally considered to include within it the notion “rational”, while “feminine” also covers the “emotional” base. And I get that, really I do. But somehow, they seem like very different concepts to me. Maybe it’s because of the society we live in, but this idea of the archetypal female figure as nurturing and emotional just seems too broad to me. I feel like there’s more to the question of “femaleness” than that. The same goes for “maleness”.

So I have three sets of polarities. With each one, two suits (and therefore two elements) fall on one end of the spectrum, and the other two fall on the other end. And each suit falls at a unique intersection of the three characteristics, a combination that no other suit shares. I like it this way, because it shows that all of the suits are similar to each other in some ways, but different in others. I like that interconnectedness.

So my four suits, all together, are:

Each suit shares exactly one characteristic with each other suit, but is different in the other two respects. Thus, the suits are simultaneously the same and opposite to each other. This means that if, for example, I see a lot of Wands and Cups come up in a reading, I can go further than just saying they’re ill-dignified: I can say there’s a predominance of emotional energy without much rationality to balance it out, and that the emotional conflict is derived primarily from differing perceptions of how active or passive the expression of that energy should be.

Now, I have deviated from tradition a bit in assigning my correspondences. For example, I’ve swapped out Swords and Pentacles on the masculine/feminine question. I understand the image of Mother Earth being linked in with the assignation of Pentacles to femininity, but somehow the Swords just seem distinctly feminine to me. (Yes, despite the clearly phallic imagery of the suit.) The Queen of Swords is, to me, one of the most archetypally feminine cards in the deck, the balance to the Queen of Cups; no longer passive and changeable, the Queen of Swords is communicative and in control of herself and the world around her. Her intelligence and (sometimes biting) wit always reminded me of Kate from The Taming of the Shrew. As for the rational/emotional dichotomy, perhaps those aren’t the best words for it. I see the suits of Swords and Pentacles as being concerned with practical matters, whereas Wands and Cups are more about all that touchy-feely passion-and-emotion stuff. And as for abstract/concrete? Well, Pentacles are the implementation of that practical energy in the real world (e.g. money), whereas the Swords are more theoretical and intellectual. The same goes for Cups, which are about actual here-and-now emotions, as opposed to Wands, which are about bigger things like spirituality or sexuality in the abstract.

As I said earlier, I don’t think that my system would necessarily work for other people. It’s entirely personal in its design, and if you don’t share, say, my view of the Queen of Swords, then the whole thing collapses. But this is a model that has proved immensely helpful for me as I’ve gone about interpreting the Minor Arcana in terms of overlapping polarities, so I invite you to consider the same question. Do the dualities of the Minor Arcana make sense to you? Is there anything you would change? If so, then why? And how would this affect your Tarot practice as a whole?

7 thoughts on “Dichotomizing the Minor Arcana”