Today concludes the three-part series wherein I assign one James Bond film to each of the Major Arcana of the Tarot. You can read Part 1 and Part 2 if you’d like to catch up with the rest of the series. Thanks again to Deborah Lipp for helping me put together this list.

The aptly named Auric Goldfinger loves one thing and one thing only: Gold. He contrives a plot to detonate a nuclear bomb inside Fort Knox, leaving the American gold supply radioactive (and unusable) for decades to come and driving up the value of his own private collection of gold. Goldfinger is certainly not the most evil Bond villain (I’d venture that title goes to the genocidal Hugo Drax), but he is certainly the most greedy, appetite-driven, and materialistic, and for that he has earned his position as our Devil.In what stands as perhaps the most memorable scene across all 24 movies to date, Bond is tied to a table and a laser is about to burn off his nether regions. “Do you expect me to talk?” asks Bond, to which Goldfinger laughingly replies, “No, Mr. Bond, I expect you to die!”Goldfinger is clever, but he has no grand designs of world domination; he just wants the gold. That sets him apart from just about every other villain that Bond has ever faced.

Bonus points for literalist imagery: At the climax of the film, Bond is chained to Goldfinger’s bomb in the heart of Fort Knox. Being locked up in a room full of gold is just about a perfect Devil image, and fiercely reminiscent of the Robin Wood Tarot‘s interpretation of the card.

The MI6 headquarters at Vauxhall has been a recurring setting in the Bond movies since GoldenEye. It’s the symbol of the agency—the place of power, security, and stability for Her Majesty’s secret service. Following a terrorist attack on M’s office in Skyfall, the building is scheduled for demolition, and in SPECTRE it falls. The climax of the film sees Bond racing into the condemned building to rescue his lover Madeleine Swann; they barely escape as the agency Bond has given his life to literally collapses around them. At the end of the movie, Bond and Swann drive away from MI6 in Bond’s (stolen?) Aston Martin; the Tower is fallen, and now Bond has the opportunity to build a new life for himself.

XVII. The Star: Diamonds Are Forever

This film is full of rebirth and renewal. Sean Connery had quit playing Bond after You Only Live Twice, but he returns to the role here. The villainous Blofeld is given a brand new face, undergoing extreme plastic surgery so that Bond won’t recognize him. Reclusive casino mogul Willard Whyte is kidnapped and held captive by the lesbian assassins Bambi and Thumper so that Blofeld can impersonate him, which is arguably a form of rebirth.* Most importantly, this film immediately follows the death of Bond’s wife Tracy in On Her Majesty’s Secret Service, and Bond’s grief and healing process hang in the background of the plot. The story opens with Bond on a crazed hunt for Blofeld, looking for revenge; and although Bond never quite gets the revenge he’s looking for, he seems to have come to terms with his loss and moved on by the end of Diamonds Are Forever.

Bonus points for literalist imagery: Blofeld’s plot involves a satellite with a diamond-powered laser, which he can use to destroy any country’s stockpile of nuclear weapons. So, you know. There’s a great big twinkly thing in the sky.

It’s James Bond… in space! Bond has to team up with Dr. Holly Goodhead to stop the genocidal Hugo Drax, who has a plan to exterminate all of humanity save for a few hand-selected genetic exemplars, who will be kept safe in his space station so that they can repopulate the human race and bring about some kind of Nazi utopia. Everything about this movie falls flat on its face; the producers were inspired by the success of Star Wars and wanted to give the sci-fi genre a shot, and I cannot overemphasize how terrible that idea was.** Nonetheless, Moonraker claims its spot as the Moon on our list because, well, it’s right there in the title.

XIX. The Sun: The Living Daylights

The Living Daylights is a great Bond film, but it has not stood the test of time. Probably due in small part to the fact that the Mujahideen (“freedom fighters”, as Bond calls them) are the good guys, helping Bond in the fight against those nefarious Commie Soviets. Bond’s love interest in this movie is Kara Milovy, a world-renowned cellist and the lover of Soviet defector Georgi Koskov. Over the course of the story, it’s revealed that Koskov’s defection was a ruse, and that he is running an international opium-smuggling scheme. In this film, Milovy herself stands as our Sun; in a story full of duplicitous and selfish characters, she is neither. She is genuinely good, with a passion for her art, and that goodness shines in stark contrast to Koskov’s perfidy.

Bonus points for literalist imagery: As with Moonraker, I’m not averse to literalism based on the title of the film. Living “daylights”, sunlight, the Sun. It’s all vaguely connected. Plus, in the climax of the movie, Kara rides into battle on a white horse—an interesting take on the classic RWS image.

XX. Judgment: You Only Live Twice

“They told me you were assassinated in Hong Kong,” inquires Blofeld when he and Bond meet for the first time on screen. “Yes,” Bond replies, “This is my second life.” And the head of SPECTRE tells him, with a chilling look in his eyes, “You only live twice, Mr. Bond.” If we’re talking about the card of resurrection, there can be only one option: The movie in which Bond fakes his own death and is (at least seemingly) resurrected so that he can hunt SPECTRE unimpeded.

Bonus points for literalist imagery: Aside from the death-and-resurrection motif, we get some fire and brimstone reminiscent of the Last Judgment: SPECTRE’s base is located inside a volcano. 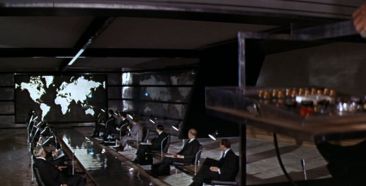 We now arrive at the conclusion of our series, Thunderball. This was the first Bond movie in which the fate of the entire world hung in the balance. SPECTRE has obtained nuclear weapons and holds the world ransom, threatening to destroy a major city unless it receives £100 million. By the time Thunderball hit screens, the Bond genre had been firmly established. Previous movies (notably Dr. No) had hinted at the extremity of SPECTRE’s commitment to doing evil, but this one upped the stakes dramatically, redefining the genre in an important way for the films that followed.

Bonus points for literalist imagery: The top agents of SPECTRE meet in a room with a giant electronic map showing all the cities they can destroy.

There are only twenty-two cards in the Major Arcana, and to date there have been twenty-four Bond films. That means that two got left off this list: A View to a Kill and License to Kill. My justification for leaving them out? Neither of them is terribly good. A View to a Kill competes with Moonraker for the title of Worst Bond Film Ever. License to Kill is okay, but it’s not exceptional, and there’s nothing thematically distinctive to earn it a spot on this list.

**Not to mention the God-awful appropriation of the musical motif from Close Encounters of the Third Kind as the code to unlock a door in a glass shop in Venice. Somebody thought they were being clever when they made that decision. They were wrong.