I’ve been wanting this deck since the artist, Ana Tourian, first published it a while back, but the first printing sold out so fast that I wasn’t able to get my hands on a copy. Luckily, she recently decided to make a second printing of the Hidden Waters Tarot available directly from the printer (you can buy a copy here). When I saw that announcement, I clicked on the “Buy Now” link faster than I think I’ve clicked on anything else in my life. Tourian is, hands-down, my favorite artist currently working in the Tarot world. Her Hidden Waters deck is magnificent. She is also currently working on a hand-drawn black-and-white deck called the Tarot of the Abyss, which is so beautiful and shows such genuine insight into the Tarot that it makes my heart bleed. Ana has also published a Lenormand deck, and she is the illustrator of Avalon Cameron’s forthcoming Bonestone & Earthflesh Tarot. Across the board, she is doing the best work in Tarot illustration. 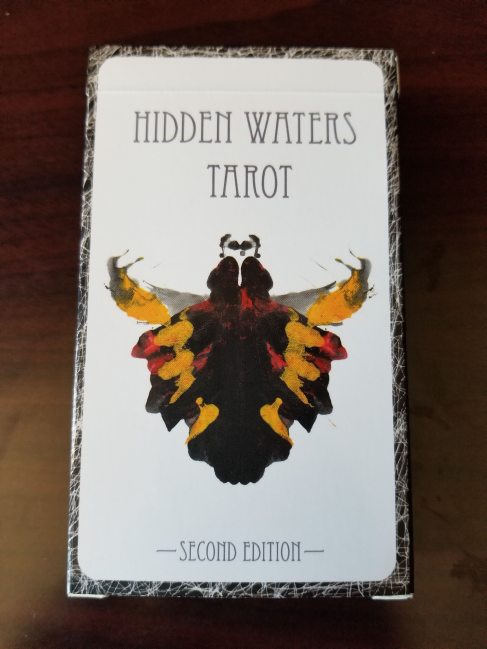 The Hidden Waters Tarot is an experimental deck where all of the images are done as inkblots. The deck isn’t accompanied by an LWB, but it does include a card with a short “About the Deck” message. Tourian writes that “The Hidden Waters Tarot works on the premise that the individual subconscious can be projected onto the abstract images, unbinding latent abilities of perception”.

“Abstract” is probably the single best word to describe this deck and the way it reads. The card images are bright, colorful, and in many cases simple, but they’re abstract designs meant to stimulate an intuitive response rather than to convey specific symbolism. This is a fascinating experiment, and Tourian’s approach to the cards is something I haven’t seen in any other deck—even in ones specifically designed for intuitive readers.

There is something haunting about this deck. I think these cards would be lovely to use for any kind of pathworking or Tarot-based meditation. That High Priestess card in particular sent shivers down my spine the first time I saw it. The Major Arcana tend to be simpler and less colorful than the Minors, perhaps because they represent bigger themes that are harder to contain in a single image (even an abstract one like an ink blot).

This is an experimental deck, so it’s probably unsurprising that I would recommend the Hidden Waters Tarot primarily to readers who are comfortable with experimenting. You’ll do best with this deck if you are already comfortable with Tarot and you want to push your boundaries, or if you are so intuitive that these abstract images will be able to trigger your reading abilities. If you’re the kind of reader who relies on having particular symbols in a card (a butterfly, a skull, a boat), then you might struggle somewhat in working with this deck.

That said, some of the images of the Hidden Waters Tarot will feel familiar to those well-versed in traditional RWS symbolism. In designing the ink blot for each card, Tourian sat with the RWS version of the card and meditated on it to get a clear sense of what the images should look like. In some of the cards she designed, that influence shines through; the Four of Pentacles in particular is strikingly reminiscent of the original Rider-Waite figure. Likewise, the Court Cards across all four suits can easily be viewed as human figures, with evocative personalities and postures straight out of the RWS.

With the Swords cards pictured here, you can see how these ink blots lend themselves to a reading. You find a pierced heart on the Three, a boat receding into the distance on the Six, and a cage (I’m tempted to say a ribcage, which has interesting implications) on the Eight. These images are colorful, simple, and powerful; I’ll be damned if that Three of Swords isn’t one of the most straightforward and striking versions of the card I’ve ever seen.

At bottom, the thing I love about this deck is that it is unique and insightful. It approaches Tarot in a way I have literally never seen, and that’s uncommon. But beyond that, it capitalizes on that approach and provides new insights and perspectives on the meaning of the cards. The Hidden Waters Tarot itself provides no commentary; there is no companion book to say what the cards do or do not mean. But each image is mysterious, engaging, and recognizably holds the energy of the card it represents; these images, presented without further discussion by the deck creator, provide readers with an opportunity to explore unplumbed depths of the cards and their meanings. A deck that does that is truly special.

This is a deck that invites you to stop, sit with the cards, and look at them. Really look at them, one at a time. Start a conversation with them. Build a relationship.

Finally, the deck comes with four additional cards, which are styled and titled more like oracle cards than like Tarot cards. These are titled the Goddess, the God, Spirit Guardian, and the Wise Crone. I’ll have to work more with these cards to see how they read and how they fit into the structure of the rest of the deck, but regardless, the images are breathtaking. I’ve actually removed the Goddess and God cards and placed them on my personal shrine (because I’m all Wiccan and stuff).

This is such a lovely deck. I don’t have words to express how in love I am with Ana Tourian’s artwork, and I hope the rest of you will also find appreciation for her contributions to the Tarot world.

3 thoughts on “A Review of the Hidden Waters Tarot”