I am not, by nature, a compassionate person. This is not to say that I’m not capable of treating others kindly, because of course I am, but compassion for me is a learned behavior. It doesn’t come naturally. Rather, I have to look at other people to see what compassion looks like from the outside, and then I emulate the morally commendable behavior I see. I learned empathy by imitation, and if I didn’t have some external model for it, I would never have learned to feel the pain of others.

I’ve written about this before, because I’m a horribly unoriginal writer and all of my blog posts boil down to the same four or five topics, but I keep coming back to it. I don’t know how common it is to feel this way about empathy. Sometimes, I express this feeling to other people, and they shrug and tell me “That’s how everyone does it”. Other times, people look at me in horror.

I’ve been spending a lot of time in the past two weeks thinking about empathy, about what it means to be a moral person, and about what it means to be a person in general. In his novel Do Androids Dream of Electric Sheep? (the source material for the movie Blade Runner), Philip K. Dick essentially argues that the inborn capacity for empathy is the defining characteristic of humanity. (As opposed to, say,  sentient androids.) And he’s certainly not the only one. Adam Smith, in his Theory of Moral Sentiments, suggests that “fellow-feeling” is the basis of human morality. Social theorists from Rousseau to Marx have all claimed that the fundamental nature of mankind is that we care for each other, show compassion, and feel each other’s suffering.

And indeed, there is something monstrous about any person who claims not to feel empathy. Or who, like me, claims that feeling empathy requires a conscious effort. Even if my experience of compassion-as-learned-behavior were universal (and I genuinely don’t think it is), I suspect that society would still want to disavow it. We want to think of humans as inherently good, and a fundamental part of being good is caring about others.

When we talk about people who have no compassion, or no empathy (because the two are technically distinct concepts), we often speak with a kind of disgusted reverence. Such people are fascinating, but also frightening and unpleasant. If I asked you to list people without compassion, you would likely name serial killers, sociopaths, the odd politician, and maybe Benedict Cumberbatch’s version of Sherlock Holmes. All of these figures are somehow alien. Intuitively, we feel like they’re missing a piece of what it is to be a complete person. 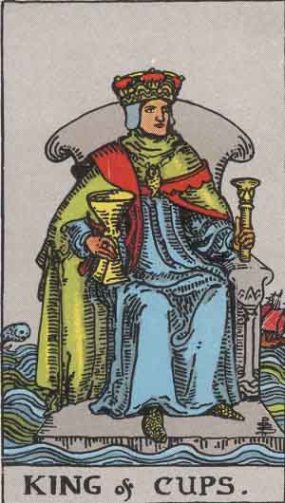 Enter the King of Cups. This is a powerful, complex card, but one of the most significant things it represents is the capacity for compassion. The King is absolutely brimming with compassion. He feels the sufferings of the whole world as if they were his own. And in this way, he is very distinctly that which I am not. He is my Other, my shadow-self,* the unfulfilled potential in my psyche. If my lack of innate compassion makes me (in a certain sense) less than fully human, the King of Cups is all too human.

Growing up, as I started to emerge into personhood and realize that I was not hardwired for empathy, I thought for quite a long time that this made me an amoral person. But over time, I realized this wasn’t true. The thing is, even if I don’t always feel compassion–if I don’t have the supposedly universal emotional urge to help others–I still act compassionately most of the time. I’m still able to recognize what kindness would look like and act in accord with the standards that conventional morality sets for me. I still do the right thing whenever I can.

I am, at my core, a deeply moral person. I’m just not a compassionate one. I do things that look like compassion, but I have to force myself to them. I have to talk myself into caring about others. Like a young child, I teach myself morality anew every day. I remind myself to treat everyone equally, to show kindness to strangers, and to do unto others as I would have them do unto me. It’s a learning process. I remind myself that it’s rationally inconsistent to have double-standards, that it’s unfair and nonsensical and generally not smart-person behavior not to behave in a way that doesn’t resemble true, heartfelt kindness.

It’s silly, I know, that I have to re-teach myself how to be a good person at every turn, but I also think it’s okay. For me, it’s a matter of making a conscious effort to incorporate something that’s missing from my personality. It’s a constant effort to bring the King of Cups back into the fold. I may not genuinely feel the compassion and empathy that he does, but I can at least work to balance myself out and behave in a way that would make the King of Cups proud.

This issue gets explored in great depth in Blade Runner and its complementary novel. There are characters who don’t feel empathy, who can’t feel empathy, but who still try to blend into human society.** The movie/book offers a bitter, nihilistic take on whether such people can ever succeed at being a part of the world, but I’m not so sure. I identify quite strongly with these characters. I think that for me, as for them, kindness is something aspirational. It is something that I will perhaps never feel with the force or the primacy that others testify is their experience, but it’s nevertheless something I can practice. I can behave kindly, even if I don’t always believe that I am a kind person. I can try to make the King of Cups proud.

I often circle back to the King of Cups in my personal work with Tarot. In many ways, I find him frightening and off-putting, but he is also necessary for me. He’s a fixed point, a sort of navigational reference in my internal landscape that allows me to find my way even with a moral compass that doesn’t seem to function the way it should. He is the role model for my aspirational, behavioral brand of compassion. In a weird, difficult Jungian way, he is my shadow, but he is also my self, and I rely on him to help me determine the kind of person I want to be.

I don’t think that compassion needs to be something that’s deeply and innately felt. I think it’s okay for compassion to be a performance sometimes–because even if you don’t feel compassion, there’s still something admirable in trying to act as if you did. For some of us, the as-if performance is the best we can manage, and I think that’s perfectly okay.*** In the words of the wise: Fake it ’til you make it.

*Ugh, I hate abasing myself by the use of this term. Under the right circumstances, I’m a die-hard Jungian, but I’m also furious with people who appropriate Jungian terms without reading the original material and understanding what those terms denote.

**Granted, this is largely because they’re running for their lives and blending in is their only hope of survival, but I digress.

***The same goes for virtues other than compassion. You see this literary trope quite often, for example, with something like courage.

3 thoughts on “Aspiring to the King of Cups: Or, I Am Not a Replicant”