Skip to content
Posted on September 2, 2015 by Jack of Wands

My first Tarot deck was actually not an RWS-inspired deck. That’s surprising if you know me, because while I do possess decks from other traditions, I’m more or less a Rider-Waite reader. If you ask me for the meaning of the Six of Swords, I’m most likely to explain it through the imagery of the ferryman taking you across the river, rather than through a synthesis of the numerological (or, for Thothies, Qabalistic) meaning of the Sixes and the elemental meaning of the Swords.

But my first Tarot deck depicted no ferryman. In fact, it didn’t depict anything. It was a playing deck, meant for the game of French Tarot, that I picked up while on vacation in Martinique down in the Caribbean. The Majors depicted scenes from French colonial life that had absolutely nothing to do with the divinatory meanings of the cards; the Minors were playing cards without even so much illustration as can be found in the Tarot de Marseilles.

Because the deck was French, and because it had unillustrated Minors, I elected to learn to read it as if it were a TdM-style deck. I decided that trump 8 would be Justice and trump 11 would be Strength (a decision that was entirely mine to make, since the images are completely disconnected from divination: 8 is a man singing in a parlor and 11 is a couple on a gondola ride). And I learned to read the cards without looking for imagery at all, relying only on what I knew of the quasi-Platonic Form represented by each card and the way that the cards fit together structurally in a spread. This latter one is a skill that has proved invaluable to me even in using more intuitively geared decks like the Tarot of the Hidden Realm.

But when I eventually and gratefully got my hands on a RWS-style deck (the lovely Tarot of the Absurd, which to this day might still be my favorite of the decks I own), I had a bit of a jarring experience. Because, well, some of the cards are different from one deck to another.

The most jarring example of this was, without a doubt, the Lovers. In the classic TdM image, the Lovers depict(s?) a man having to choose between two women, one of whom represents reason and the other passion.* This card represents, above all else, a choice that must be made. But in the Rider-Waite image, there is no second woman. We see only the two lovers being brought together by divine providence, and in this sense, the meaning of the card changes completely. It’s no longer about tough decisions. It’s now about balance, about the unification of two opposites. 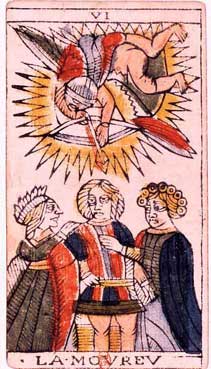 And when I first started to read in the RWS tradition, that was a very difficult transition for me to make. Because while I certainly could turn up a RWS Lovers card and read it as if it were TdM, this felt fundamentally wrong to me. I was using the deck in a way that was fundamentally opposed to how its creators had intended for it to be used, and that didn’t sit terribly well for me.

(Of course, from there we can go into a lengthy question of what anyone means by the “intended use” of a divinatory tool. The Elder Futhark and the Ogham, for example, were developed as writing systems, and the latter was never used for divination until the Neo-Pagan revival got its hands on the runes. But hopefully you get what I mean.)

And so, in one of those painful moments of personal growth that made me a much better Tarot reader and probably also a better human being (expanding my mind and all that), I changed. I started forcing myself to read the cards the way the deck creators intended, rather than the way I was used to. And whenever I pulled out my faux TdM, I would allow myself to switch back to the system I was comfortable with, but I essentially became a different Tarot reader for each of the decks I used. And when I started to acquire new decks, I did the same. Each time I come across a Tarot deck with a different system than what I know, my immediate instinct is to reject the new system and read the cards the same way I would read any other pack.

Slowly–more slowly than I like to admit–I’m overcoming that instinct.

It’s still difficult for me with decks like the aforementioned Tarot of the Hidden Realm, which really does meander away from tradition (although it’s such a beautiful deck that I can’t say I mind). Some angry little imp within me screams and rails against having to adapt, having to make Tarot a living, fluid practice rather than a set of unchangeable rules to be applied across all decks.

It’s easier for me with decks like the Thoth Tarot, although I confess** that I think of the Thoth more as an oracle deck than as a Tarot.

But I do think it’s important. And I do think that, at the end of the day, it makes my reading abilities across all traditions that much stronger. It forces me to reevaluate my beliefs about Tarot as a whole and about individual cards, and makes my thinking much more flexible than it would have been if I’d just spent the entirety of my reading career living in one single tradition.

*It is so typically French that this deck views those two principles as irreconcilably opposed. I blame Descartes. But I ask you, in all honesty, why does the TdM seem to think it’s impossible for love to be both reasoned and passionate? I get that there’s this eros/logos dichotomy going back to Plato’s Symposium, but Plato at least acknowledged the need for both kinds of love. The French really seem to believe it’s an either/or. But that, I think, is a subject for a different post.

**And, having sufficiently pissed off all the Thothies in the room, I should offer an explanation and an apology. Allow me to assure you that I find the Thoth system to be beautifully complex, self-contained, and intellectually rigorous (the latter being one of the highest forms of praise I’m capable of offering). I know it’s not only a Tarot, but in some ways is the Tarot. But some part of my brain is always inclined to read any deck with keywords printed on the cards more as an oracle than as a Tarot, because working with such decks doesn’t require systematic Tarot knowledge if you have a strong intuition and can work outwards from a central theme. That’s not to say that such knowledge isn’t contained within the Thoth, isn’t helpful, or isn’t necessary if you want to get the most out of the deck. But just for surface-level readings, it’s not necessary, and with RWS and TdM decks it is. In some ways, I think that the Thoth is an easier deck to start out with, but maybe that’s just me.

7 thoughts on “Reading the Lovers in RWS and TdM”